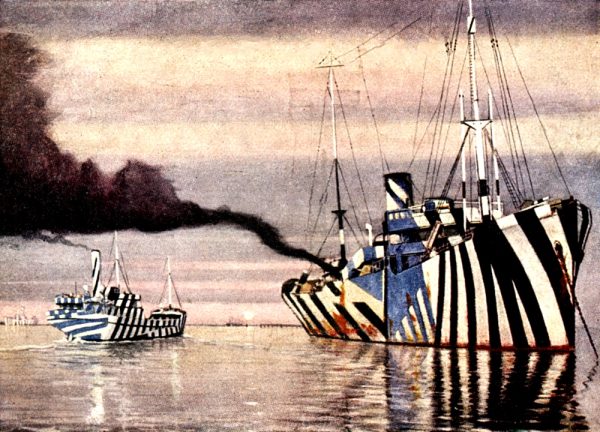 In the early days of World War I, before the United States Armed Forces got involved, German U-boats were torpedoing and sinking British and American merchant ships at a rate of about 50 a week. The toll was huge. The U-boats were raining hell in the north Atlantic, sliding silently beneath the waves, stalking their prey.

In response, marine artist Norman Wilkinson came up with an idea, a very clever countermeasure. He devised something completely new, something different, something very unexpected. His concept was called Dazzle Camo. It literally made ships jump out visibly at U-boat commanders and gunners with blatant and dramatic hull paintings. The ingenious beauty of this was it also made the ships much harder to target, much harder to accurately determine direction and speed. In Wilkinson’s own words, dazzle was designed “not for low visibility, but in such a way as to break up her form and thus confuse a submarine officer as to the course on which she was heading.” It was all about disruption and confusion. And it worked.

Think about those two words for a moment, disruption and confusion.

Seems to me they pretty much summarize the financial services industry today. Most “financial advisors” are in fact magnificent sales engines. They are finely tuned machines with warm, white smiles and confident demeanors. They are well-practiced in the art of disruption and confusion. Their goal, their objective, is the disruption of your current plan or strategy by creating enough confusion to illicit some uncertainty, a scent of fear or expectation of gain. And then, BANG, they have you. You are buying a new annuity, trading one stock for another, perhaps investing in a Unit Investment Trust or the latest, greatest Long/Short strategy fund.

And what about the majority of financial advertising? Think CNBC, the cover of your most recent copy of Money magazine, the newest Schwab commercial that promises to deliver the best trading tools at the lowest cost? I mean, it’s all in your face. It’s not subtle, not at all. It is designed to disrupt and confuse, to excite motor neurons deep in the recesses of your emotional brain. And, just like the dazzle camouflage of Norman Wilson disrupted and confused north Atlantic U-boat commanders, the financial services industry will disrupt and confuse you.

How to avoid this disruptive siren song, a steady and seductive drumbeat from insurance agents, stock brokers and bankers?

Recognize it for what it is. Ignore it. Turn it off. Go cut the grass. Go sailing, go for walk and take your dog. At the least, understand that this siren song is designed to get you to act, to invoke raw emotion, get a reaction instead of a response. Wonder if you will whose interest is really being served?

Your best bet is to formulate a strategy for you and your situation. Certainly, you want to build in some flexibility, but stick with your plan, be comfortable with its design. Enjoy your life and your hard-earned money, it’s the last place you want any Razzle Dazzle.

For more, call me or any fee-only Certified Financial Planner™ to get objective advice centered on you and yours, we’ll answer your questions.

Manage Cookie Consent
To provide the best experiences, we use technologies like cookies to store and/or access device information. Consenting to these technologies will allow us to process data such as browsing behavior or unique IDs on this site. Not consenting or withdrawing consent, may adversely affect certain features and functions.
Manage options Manage services Manage vendors Read more about these purposes
View preferences
{title} {title} {title}